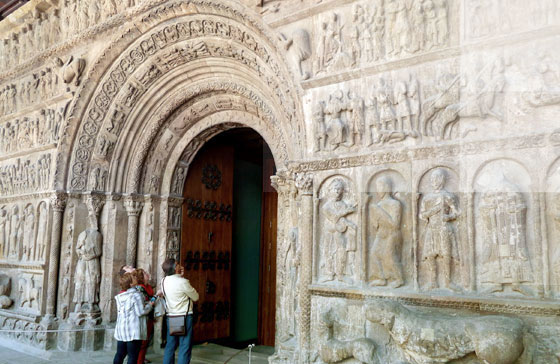 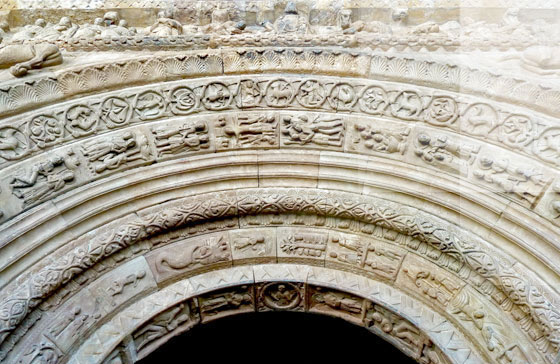 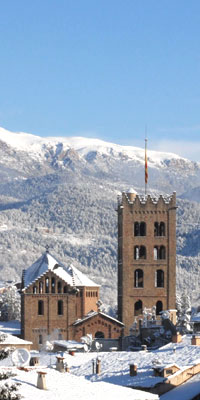 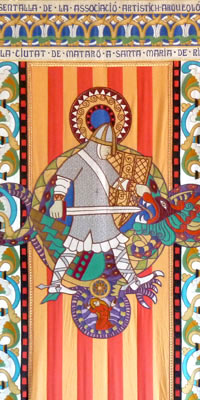 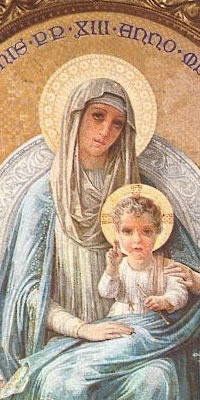 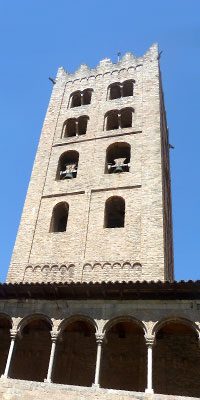 RIPOLL, GIRONA AND THE CATALAN PYRENEES

Visiting the Monastery of Ripoll is a must-do for everyone visiting Ripollès. Girona and the Catalan Pyrenees offer an impressive range of options to visitors, with many allocation possibilities (rural houses, hotels, camping). Leisure opportunities will please cultural or culinary tourists, those looking to relax and active travellers alike (bike tracks, skiing or excursions). Whatever the purpose of your visit to Ripoll, don’t miss the chance to visit the Monastery of Saint Mary.

The Monastery of Santa Maria of Ripoll (Santa Maria de Ripoll), the Cradle of Catalonia, was founded over 1100 years ago by Count Wilfred the Hairy. Over time, it became a reference not only thanks to its historical and religious importance, but also because of its cultural, artistic and economic prominence. The magnificent Romanesque portal -one of the treasures of European sculpture- and the harmonious two-storey cloister stand out. The basilica houses modernist pieces, Wilfred’s tomb, and evidence of past monastic life and of scribes' work in the Scriptorium.

THE CRADLE OF CATALONIA

Count Wilfred the Hairy (comte Guifré el Pilós) founded the Monastery of Ripoll in 880, when he was in charge of repopulating the Pyrenees and Osona. These areas were uninhabited after Muslims were defeated and Arab domination in the region ended. At first, the Monastery of Saint Mary was a small Benedictine temple, but from very early on it grew steadily.

SCRIPTORIUM, LIBRARY AND YEARS OF SPLENDOR

Ripoll’s expansion began in the tenth century, when Abbot Arnulf founded the Scriptorium, a book-producing centre located in the Monastery. Specialized Benedictine monks worked in the Scriptorium, illuminating books that focused on a wide range of disciplines. It was thanks to this diversity in content that the Library attracted scholars to Ripoll. Also, as a consequence of specialization, scribe monks produced high quality, beautiful books. The best examples of such works are the eleven-century bibles, which are among the best ones made all across Europe.

THE BIBLE ON STONE IN THE HEART OF THE PYRENEES

The triumphal-arch-shaped Romanesque portal was built in the twelfth century, during the Monastery’s golden age. Because of its originality, quality and size, the portal is recognized as one of the most important pieces of European Romanesque sculpture. Each one of the scenes in the portal of Ripoll is full of symbolism and meaning.

The oldest gallery in the elegant cloister, the lower north gallery, dates back to the twelfth century. In this sector of the cloister is where we can marvel at impressive arches and capitals. They are notable for their quality and variety of motifs. On the walls, we can see traces of the buildings than used to stand next to the cloister, where the monks worked and lived. That helps us understand Benedictine organization and how life in the Monastery was like.

The basilica was reconstructed in the late nineteenth century after being abandoned for almost fifty years. It houses the tomb of count Wilfred -the founder of the Monastery and, symbolically, the founder of Catalonia-. We can also admire the Saint Mary mosaic and the reproduction of the banner by modernist artist Puig i Cadafalch. These artworks help us comprehend the Monastery’s key role during the Catalan Renaissance period and its symbolic significance for Catalonia. 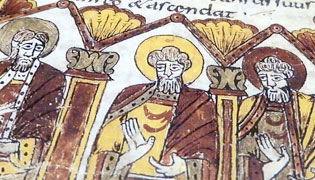 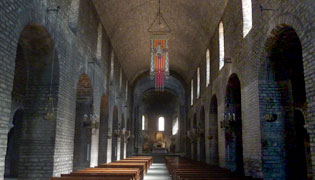 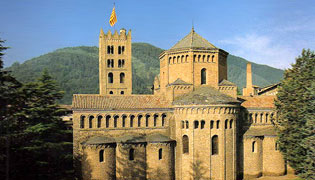 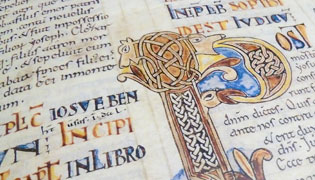 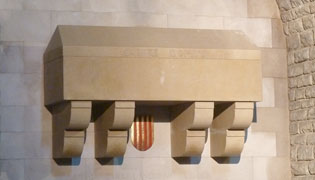